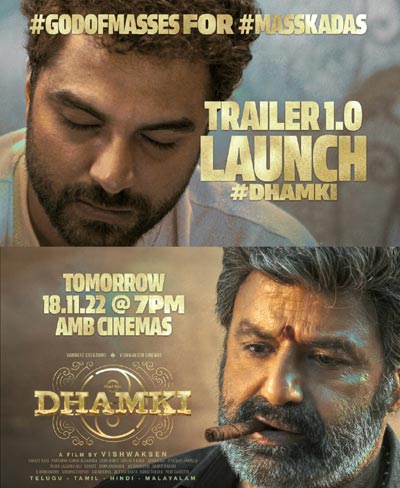 Vishwak Sen, who was last seen in the rom-com Ori Devuda is gearing up for his first PAN Indian film Dhamki. The first look poster was released today, and it grabbed instant attention. The actor is also wielding the megaphone for this project.

The latest news is that trailer 1.0 of Dhamki will be launched by none other than Nandamuri Balakrishna. Accordingly, the star hero will unveil the trailer tomorrow at AMB Cinemas, Hyderabad, at 07:00 PM. Vishwak Sen has expressed his fondness for Balayya in Unstoppable’s recent episode, and now Balayya himself is coming to support the young hero.

Nivetha Pethuraj is the leading lady. Karate Raju produces the movie under Vanmaye Creations and Vishwaksen Cinemas banners. Dhamki has Rao Ramesh, Hyper Aadi, Rohini, and Prithviraj in prominent roles. The film will hit the screens in February 2023.