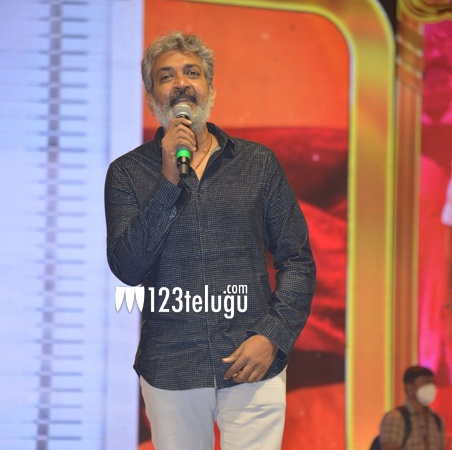 Numero uno director Rajamouli was one of the chief guests at the pre-release event of Balakrishna’s Akhanda that was held tonight at Shilpakala Vedika. Speaking at the event, Rajamouli started off by thanking the film’s director Boyapati Srinu for bringing a huge josh to fans and the entire film industry. Rajamouli hoped that movie lovers and the industry will have a gala time at jam-packed cinemas, starting with Akhanda’s release on December 2nd.

“Balayya is an atom bomb. Only Boyapati Srinu garu knows how to correctly launch the bomb. He should not keep that secret to himself but share it with everyone,” said Rajamouli. The RRR director went on heap praises on Balayya’s energy and dances. “I’m sure that what we saw in the promos is just a glimpse and that Akhanda is full of such terrific moments. Just like you all, I’m eagerly waiting for Akhanda character’s intro scene and I’ll surely watch the film’s first day first show in a theater,” Rajamouli added.