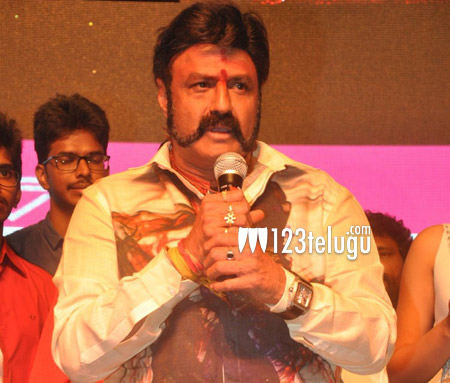 Film Star turned politician Nandamuri Balakrishna was the chief guest at the audio launch event of actress Trisha’s upcoming horror drama, Nayaki. The event took place in Hyderabad last night and Balayya had some nice things to say about his Lion actress.

Speaking on the occasion, Balayya sang the “Pilla ni kallakunna kaatukemo super e” song from the duo’s Lion, and said that he never thought Trisha would surprise him with a ferocious role like the one she did in Nayaki. Balayya went on to compare Nayaki’s poster with his first look poster from Dictator. Balayya further wished the entire film’s unit a grand success.

Nayaki’s audio album was composed by Raghu Kunche and the film was directed by Govi. Giridhar and Padmaja Mamidipally produced the film under their Giridhar Productions banner.