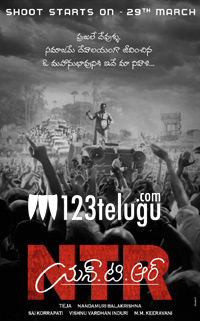 It’s been reported earlier that NTR, the highly-anticipated biopic on legendary actor and the Chief Minister of erstwhile Andhra Pradesh NT Ramarao, will have a grand launch on March 29. NTR’s son and senior hero Nandamuri Balakrishna will be reprising his father in the biopic.

Balakrishna is personally overseeing the biopic’s inaugural ceremony. He has reportedly sent special invitations to his fans and the residents of his parents NTR and Basavatharakam’s birth places, Nimmakuru and Komaravolu in Krishna district. The inaugural ceremony is expected to take place at the Ramakrishna Studios in Hyderabad.

Teja will direct this prestigious project, while Balakrishna himself will produce it along with Vishnu Induri and Sai Korrapati. Stay tuned for more updates on this exciting biopic.