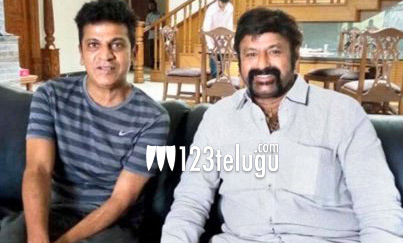 Nandamuri Balakrishna recently​ flew down to Bengaluru and visited his good friend and Sandalwood superstar Shivarajkumar and his brothers Puneeth and Raghavendra. Balayya expressed​ his condolences to Shivarajkumar and brothers​ over the death of their mother Parvathamma.

Balayya had spent some quality time and reminisced the friendship shared by his father NT Ramarao and Shivarajkumar’s father and legendary Kannada ​actor Rajakumar. On this occasion, Shivarajkumar reportedly invited Balayya to launch the audio​ album of his upcoming film, Mass Leader. Even the makers of Shivarajkumar’s yet another film, Tagaru, are planning to get Balayya unveil the film’s teaser.

It is well-known that Shivarajkumar had acted in a special cameo in Balayya’s prestigious 100th film, Gautamiputra Satakarni, on Balayya’s request.