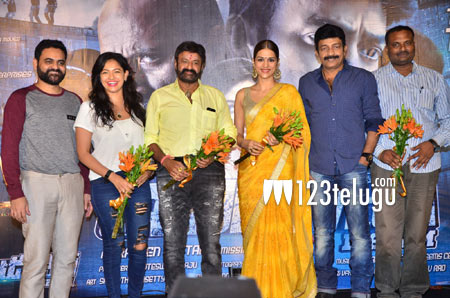 Nandamuri Balakrishna has unveiled the grand theatrical trailer of senior hero Rajasekhar’s high-budgeted action thriller, PSV Garuda Vega 126.18M, during a glitzy event tonight. The style quotient in the trailer is quite high and the spy element will leave the audience thrilled in cinemas.

Rajasekhar will be seen as an under cover agent in a covert mission carried out by the Indian intelligence service. The duel between Rajasekhar and the film’s antagonist Kishore seems quite promising.

PSV Garuda Vega 126.18M is gearing up for its release on November 3. Praveen Sattaru is directing the film and M Koteswara Raju is producing it. Pooja Kumar is the film’s leading lady and Sunny Leone will be seen sizzling in a special song.