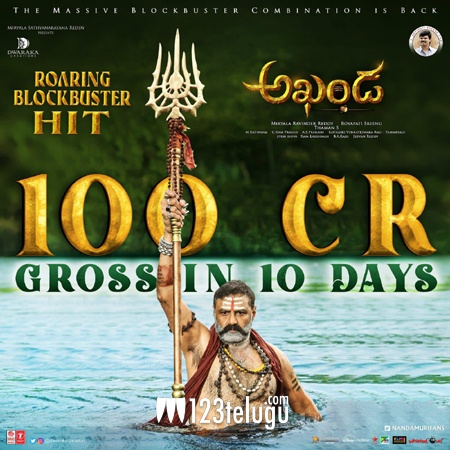 Hero Balakrishna has pulled off a sensational feat. His recently released action drama, Akhanda, has entered the Rs 100 crore club within just 10 days of its release. The Boyapati Srinu directorial has grossed over Rs 100 crore at cinemas worldwide.

Akhanda entering the Rs 100 crore club is no mean feat, considering the hurdles amidst which the film had its theatrical release. The AP government didn’t permit ticket rates hike and early morning shows across the state. Also,
there was uncertainty regarding family audiences coming back to theaters due to the pandemic. Akhanda’s massive success in December has given a huge boost to Tollywood, especially with the Sankranthi biggies gearing up for their release.

Akhanda is having a decent run even in its second weekend and is registering good collections, with occupancies better than the new releases. At the US box-office, the movie is inching towards the coveted $1 million club. Produced by Miryala Ravinder Reddy, Akhanda featured Srikanth, Jagapathi Babu, Pragya Jaiswal and Poorna in crucial roles.