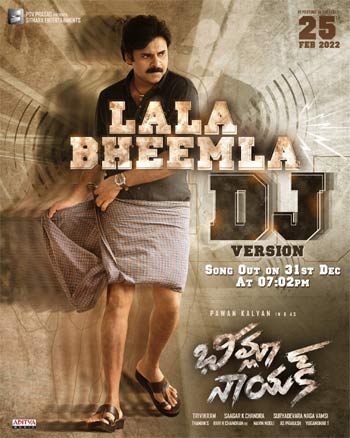 As we mentioned earlier, the team Bheemla Nayak has announced that they are releasing the DJ version of the film’s hit song, La La Bheemla.

The makers also noted that the song will be released on December 31 at 07:02 PM. Audiences are eagerly waiting for this song composed by the successful music director, SS Thaman.

Pawan Kalyan and Rana Daggubati are playing the lead roles in this action entertainer directed by Saagar K Chandra.

Produced by Naga Vamsi of Sithara Entertainments, the movie is scheduled to release on February 25, 2022.