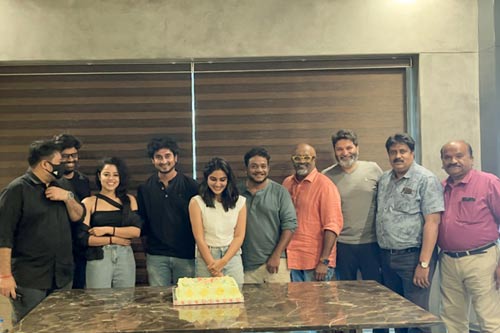 Lala Bheemla, the massy and energetic number from Pawan Kalyan’s Bheemla Nayak, was released on Sunday (Nov 7) morning. The song became an instant hit and set a new record by becoming the most viewed South Indian film song, with over 11 million views and nearly 700K likes so far on YouTube. Not stopping there, Lala Bheemla is also trending atop YouTube trends ever since its release.

Meanwhile, Bheemla Nayak’s team celebrated the song’s massive success by cutting a cake during the shoot. Lala Bheemla was crooned by young playback singer Arun Kaundinya and penned by director Trivikram, while Thaman is the music composer.

Also starring Rana Daggubati, Nithya Menen and Samyuktha Menon in lead roles, Bheemla Nayak is being directed by Saagar K Chandra and produced by Naga Vamsi under Sithara Entertainments banner. The film is going to release on January 12.