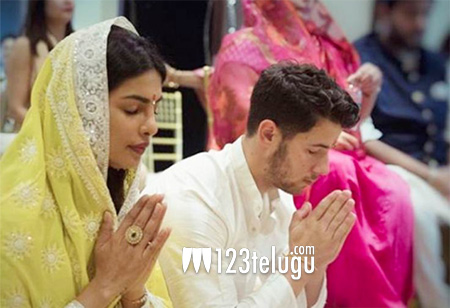 After their low profile engagement in London after Priyanka’s birthday in July, Priyanka Chopra and her American singer boyfriend Nick Jonas got engaged to each other in traditional Hindu style this afternoon. The entire family members of both the stars graced the joyous occasion.

Later in the evening, Priyanka and Nick organized a grand engagement bash for the who’s who of Bollywood. The Ambanis, Alia Bhatt, Parineeti Chopra, Anusha Dandekar, Aayush Sharma and Arpita Khan, Vishal Bharadwaj, Siddharth Roy Kapur and several others were spotted wishing the soon-to-wed couple.