Brahmanandam’s glimpse from Panchathantram is out now
Published on Feb 1, 2022 6:23 pm IST 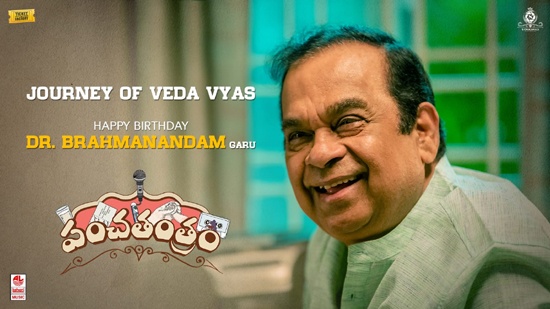 The makers of the intriguing Telugu anthology, Panchathantram, have released a special teaser of Hasya Brahma, Brahmanandam, on the occasion of his birthday.

It is already known that the veteran comedian is playing Veda Vyas character in this movie. Titled Journey of Vyas, the glimpse showcased the senior actor as a retired anchor who worked for All India Radio.

Actress Swathi appeared as the daughter of Brahmanandam, who participated in a story-telling competition. Brahmi asked his daughter if there is any rule that one must begin their career in 20s and not in 60s. The lovely glimpse has a soulful background score which made it more intriguing.

Written and directed by Harsha Pulipaka, the movie is star-studded
with Samuthirakani, Shivathmika Rajashekar, Naresh Agastya, Rahul Vijay, Adarsh Balakrishna and others.

Prashanth R Vihari and Shravan Bharadwaj are the music directors for this movie, which is bankrolled by S Originals and Ticket Factory.