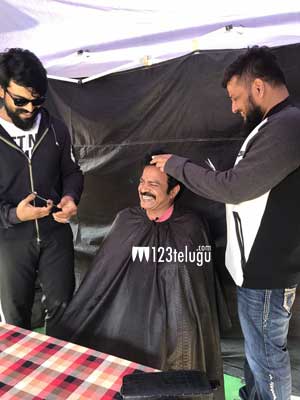 Brahmaji has been in the industry for a long time now. He has done some good roles in some super hit films and now, he has been part of a successful film Sye Raa.

Brahmaji played Chiranjeevi’s sidekick and was seen in most of the film. There is a scene where even goes bald and just for one scene he shaved off his head.

Remembering all those days, Brahmaji shared a picture from the shoot where he is getting his locks shaved by director Surender Reddy and Charan.

Requested Ram Charan garu to give me an opportunity to work with mega star in #SyeRaa .. never imagined it to be a full length role.. ever greatful 🙏🏼🙏🏼.. Nd can’t thank enough @DirSurender @RathnaveluDop for ur support 🙏🏼.@KonidelaPro 🙏🏼 pic.twitter.com/jKqRYCZdj3