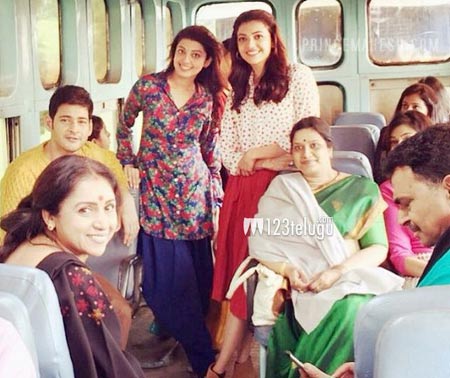 Superstar Mahesh Babu’s forthcoming film, Brahmotsavam, has completed a month long key schedule in Ooty recently. After a brief gap, the unit will again resume the shooting from the first week of January. The film is slated to release in the first week of April and the audio launch will tentatively take place in March.

Now, latest buzz indicates that the film’s audio will be launched in the abode of Lord Vishnu, Tirupati. It is well known that the film’s shooting flagged off in Tirupati several months ago and apparently, the makers are planning to continue the sentiment even for the audio album.

Mickey J Meyer is the film’s music composer and Sreekanth Addala is directing this wholesome family entertainer, which is being produced by PVP Cinema. The film features Kajal Aggarwal, Samantha, Pranitha, Revathi, Tulasi and Sayaji Shinde and others in key roles.