Brahmotsavam gearing up for May first week release?
Published on Apr 5, 2016 9:38 am IST 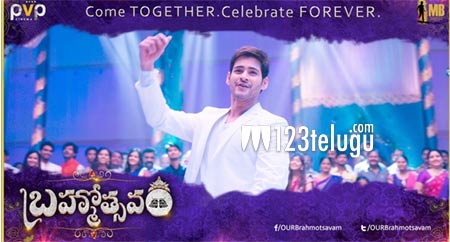 Superstar Mahesh Babu’s Brahmotsavam is in the last leg of its shooting part. The makers are currently canning the climax episodes on the lead cast at Ramoji Film City. The entire talkie part will be wrapped up by April 10 and a couple of songs will be shot in Pune from April 11 to 20.

We have already reported that Brahmotsavam’s audio launch event will take place in Tirupati on the 24th of April. However, there has been no clarity over the film’s release date and there were even reports that the film may hit the screens in the last week of May.

However, a latest update reveals that the makers are planning to release the film on May 6th. An official confirmation is awaited in this regard. Sreekanth Addala is directing Brahmotsavam and PVP Cinema is producing it. Kajal, Samantha and Pranitha are the film’s leading ladies.