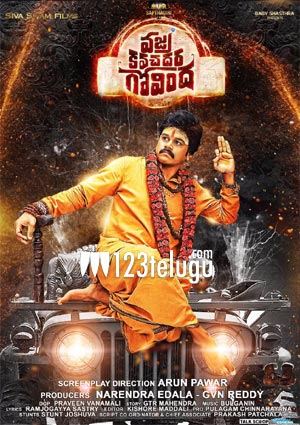 Sapthagiri is one of the popular comedians in Tollywood. He turned hero with Sapthagiri Express in 2016. Undeterred by the film’s box-office result, he went on to play the main lead in Sapthagiri LLB in 2017. Now, Sapthagiri is trying his luck as a hero yet again.

Today, the makers of Sapthagiri’s upcoming film, Vajra Kavachadhara Govinda, unveiled the film’s first look poster. In VKG, Sapthagiri plays Govind, a small time thief. The film will be high on entertainment, and it is being directed by Sapthagiri Express director Arun Pawar and produced by Narendra and GVN Reddy. Vaibhavi Joshi is the leading lady in the film.

Of late, Sapthagiri is rarely playing full-length comedy roles in movies as he is trying to cement his position as a solo hero. Whether he will score the much-needed hit with VKG remains to be seen.