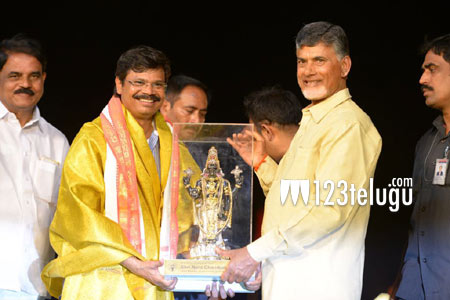 It is a known fact that Boyapati Sreenu was entrusted the job of laying various sets to carry out the Pushkara puja in Vijayawada. The prestigious festivity has now ended and Boyapati Sreenu, in particular, has been appreciated for doing a splendid job.

The chief minister of Andhra, Nara Chandra Babu Naidu showered Boyapati with praises and even felicitated him in Vijayawada. Reports suggest that CBN was quite happy with the way the event was designed by the ace director and also the various sets were laid out to perform these special rituals.

Meanwhile, Boyapati will be back with his next film which stars Bellamkonda Srinivas as the main lead.