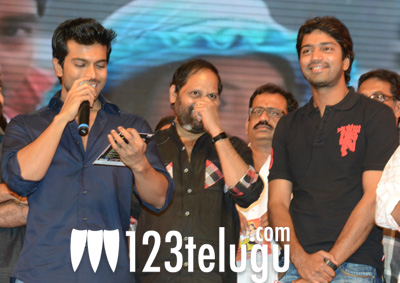 Generally, young generation star heroes jump at any chance to act in remakes of their family blockbusters.Mega Power Star Ram Charan however, wants Allari Naresh to act in the remake of Megastar Chiranjeevi’s classic comedy ‘Chantabbai’!

Charan was the chief guest for the audio launch of Allari Naresh’s ‘Yamudiki Mogudu’ and while addressing the crowd, Charan made these comments ” It would be great to see Allari Naresh in the remake of Chantabbai. I sincerely hope that he makes that film. I also wish him the very best for Yamudiki Mogudu and I want this movie to be a landmark film in his career”.