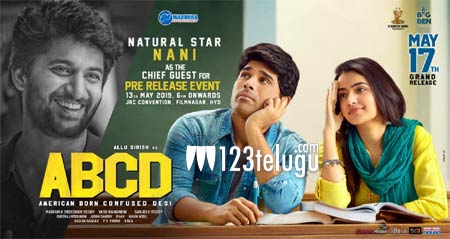 ABCD is a film which has created a decent buzz all over. The latest we hear is that the pre-release event of the film will be held on the 13th of this month in JRC Convention Hyderabad.

What’s more interesting is that natural star Nani is the chief guest for this event. ABCD is the remake of the hit Malayalam film with the same name and Allu Sirish reprises Dulquer Salman’s role.

Ruksaar Dhillon is playing the female lead in this film which is up for a release on the 17th of this month.