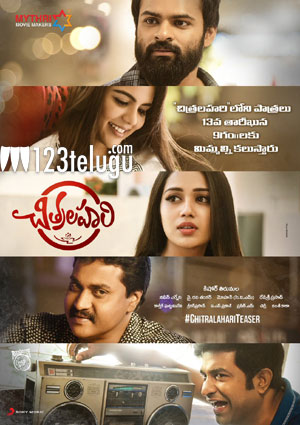 The teaser for young Mega hero Sai Dharam Tej’s upcoming film, Chitralahari, will be out tomorrow (Mar 13) at 9 am. The film is touted as a triangular romantic drama, and Sai will be seen romancing Nivetha Pethuraj and Kalyani Priyadarshan in it.

Chitralahari is being directed by Nenu Sailaja fame Kishore Tirumala. The film’s shoot is nearing completion and the post-production formalities are underway simultaneously. Chitralahari is slated to hit screens on April 12. Leading production house Mythri Movie Makers banner is bankrolling this project.