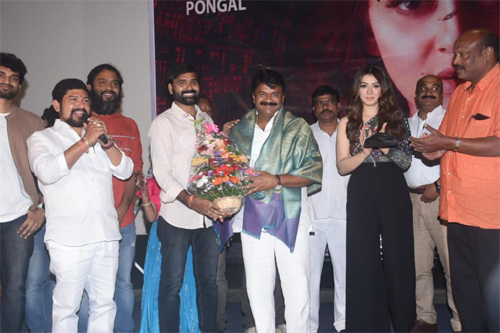 Talasani Srinivas Yadav, the Cinematography Minister of Telangana, has launched the teaser and the first look of Hansika Motwani’s upcoming crime thriller, My Name Is Shruthi today.

Speaking to the media, the minister said, “The teaser is impressive. Corona has had a huge impact on the film industry. As many new movies are releasing for Sankranthi, the government has increased the ticket prices and shows in support of the industry,” said Srinivas Yadav.

“Cinema has no caste, religion or place. Movies are important as they entertain the public. We have created a single window to solve the problems that occur while taking permission for locations,” said the minister.

He said, ” Many people are depending on the industry and the media needs to give its continuous support to movies”. He wished the director Srinivas Omkar and the entire team of My Name Is Shruthi all the best.