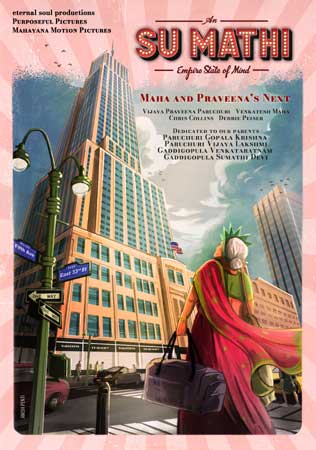 Young filmmakers Venkatesh Maha and Paruchuri Praveena joined hands with each other and produced two critically acclaimed movies so far, Care of Kancharapalem and the recently released Umamaheswara Ugraroopasya. Now, they are all set to collaborate for the third time.

Venkatesh Maha took to Twitter and announced their next project, interestingly titled ‘Su Mathi – an Empire State of mind’. The announcement poster has an old Indian woman in front of the iconic Empire State Building in America. It looks like several Hollywood cast and crew members will be part of this project. More details will be out soon.

On this date 4 years ago I found @paruchurimd who believed in my vision & “C/o Kancharapalem” became a reality. So, on the anniversary of our partnership we r announcing our next film. “SU MATHI” – an Empire State of mind…!#Su_Mathi_theFilm @bedheadchicken @planetdebbie pic.twitter.com/LliyQNgz4O