Competition among senior stars to get this nominated post in YS Jagan’s govt
Published on Jun 2, 2019 11:58 pm IST 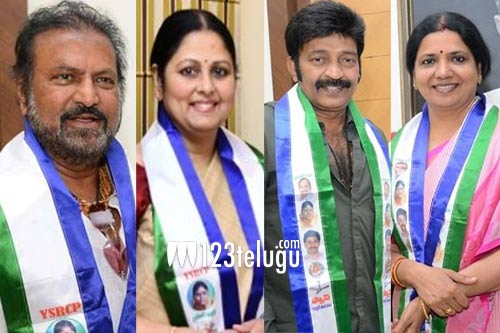 In his run-up to the general elections, Andhra Pradesh Chief Minister YS Jagan was supported by numerous Tollywood stars. While some actors had campaigned for the YSRCP, some extended their unconditional support through the media.

And it looks like it’s payback time from Jagan’s end now. As per the latest reports, there is a huge competition among senior Tollywood stars and YSRCP sympathizers such as Mohan Babu, Jayasudha and Jeevitha-Rajasekhar to be honored with the post of Chairman, Andhra Pradesh Film Development Corporation (APFDC).

However, given her close association with Jagan’s father and former AP CM YS Rajasekhara Reddy, Jayasudha is said to be the front-runner to get this nominated post. On the other hand, Mohan Babu’s name is also said to be under consideration for the TTD chairmanship. These are mere speculations and we will have to wait for an official announcement.