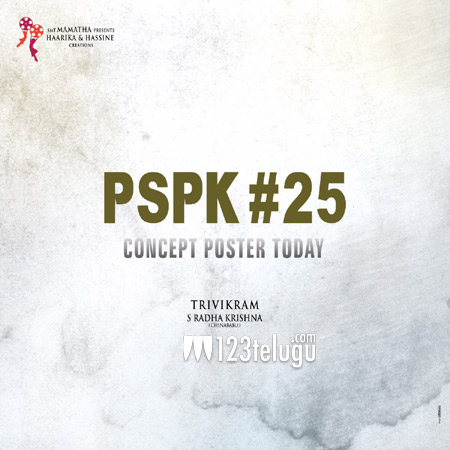 Earlier this year, the makers of Sukumar and Ram Charan’s ongoing film, Rangasthalam 1985, unveiled the film’s concept poster. The poster gave enough idea about how the film’s story and milieu are going to be. Following suit now is the makers of Power Star Pawan Kalyan’s landmark 25th movie.

This evening, the makers of this as-yet-untitled movie will be releasing the film’s concept poster. Meanwhile, the suspense prevails on the film’s title logo and first look poster, which were rumored to be released tomorrow as Pawan’s birthday treat.

Trivikram is directing this high budget entertainer. Anu Emmanuel and Keerthy Suresh are the film’s leading ladies. S Radhakrishna is producing the movie. Anirudh Ravichander is the music composer.