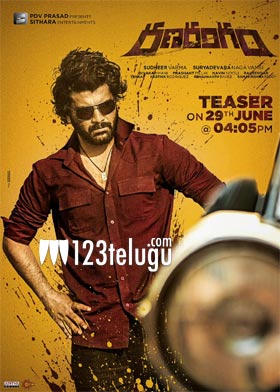 Sudheer Varma is ready with his new film Ranarangam which has Sharwa playing the gangster’s role.

The film has completed its shoot and the latest we hear is that the first look teaser will be out tomorrow at 4.05 PM.

The film is about the rise of gangster and Shawra will be seen in an aged look for one part of the film.

Kajal and Kalyani Priyadarshan play key roles in this film which is up for a release on the 2nd of August.