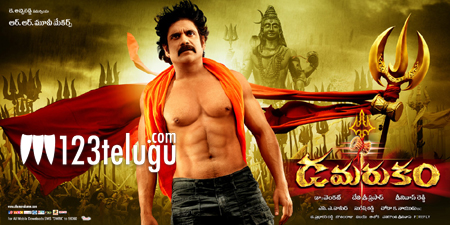 ‘King’ Akkineni Nagarjuna’s ‘Damarukam’ has been delayed due to various factors and we are now hearing reports of a possible November release. Efforts are still being made to get a Dussehra release but it is not clear how much of a chance they have of at this point of time.

The release of this movie has now become crucial for a host of ther Tollywood projects. Rana Daggubati’s ‘Krishnam Vande Jagadgurum’ , ‘Gundello Godaari’, ‘Yeto Vellipoyindi Manasu’ and a few other films are queuing up for a November release. Unless there Damarukam’s release date is confirmed, the release dates of the above mentioned movies may get mired in confusion.

A clarity over Damarukam’s release is expected this week and since the movie is carrying a good buzz, the production team is hoping for a good run at the Box Office. The movie has Nagarjuna and Anushka in the lead roles. Devi Sri has composed the music and Srinivasa Reddy is the director. The movie has been produced on R.R.Movie Makers banner.