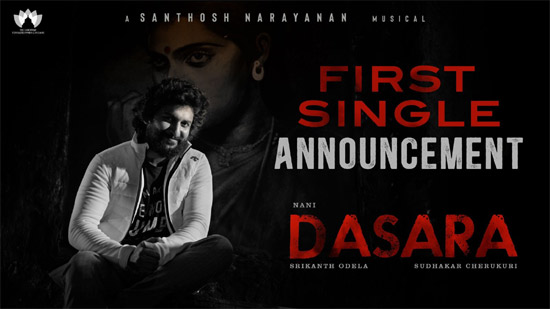 Here is a massive update for the fans of Natural Star Nani. The Ante Sundaraniki hero turned mass for Dasara, a pan-Indian movie directed by Srikanth Odela. Today, the actor took to his social profiles and announced a crazy update.

Termed as the massiest local street song ever, the first single Dhoom Dhaam Dosthaan, composed by Santhosh Narayanan and choreographed by Prem Rakshith, will be released on Dussehra i.e., on October 5, 2022. The crazy announcement video featuring Nani made fans quite happy.

Keerthy Suresh to romance Nani in this mass entertainer, bankrolled by Sudhakar Cherukuri of Sri Lakshmi Venkateswara Creations. Sai Kumar, Samuthirakani and Zarina Wahab playing key roles in this movie, which is locked to release in theaters on March 30, 2023, in all major Indian languages.