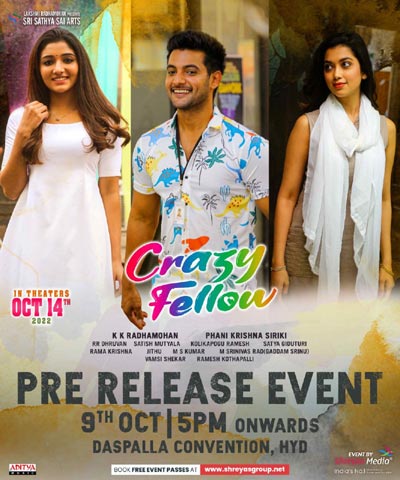 Tees Maar Khan is the last film of the young actor Aadi Saikumar. Directed by Phani Krishna Siriki, the hero will be seen next in Crazy Fellow.

The fun-filled entertainer is up for release on October 14, 2022. So, as a part of that, the makers have planned to hold a grand pre-release event on October 9, 2022, at Daspalla Convention in Hyderabad from 5 PM onwards.

Crazy Fellow has Digangana Suryavanshi and Mirna Menon as the female leads. Saptagiri, Narra Srinivas, Anish Kuruvilla, Vinodhini Vaidyanathan, Ravi Prakash and others are also a part of this movie, produced by Sri Sathya Sai Arts. Dhruvan composed the music for this film.