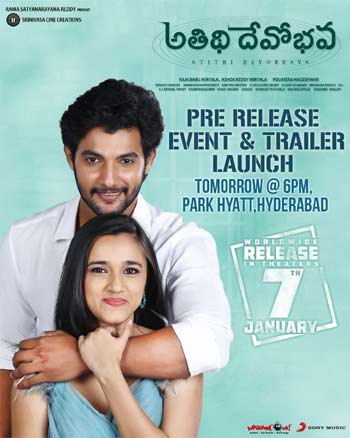 Romantic thriller, Atithi Devo Bhava starring Aadi Sai Kumar and Nuveksha is all set to release in theaters on January 7. Directed by Polimera Nageshwar, the movie is produced by Raja Babu Miryala and Ashok Miryala.

The makers have announced today that the movie’s pre-release event is scheduled to happen tomorrow at Park Hyatt hotel in Hyderabad. The event is going to happen from 6 PM onwards.

It is also confirmed that the movie’s trailer will also be released at the event. But, there is no info about who is going to grace the pre-release event as the chief guest.