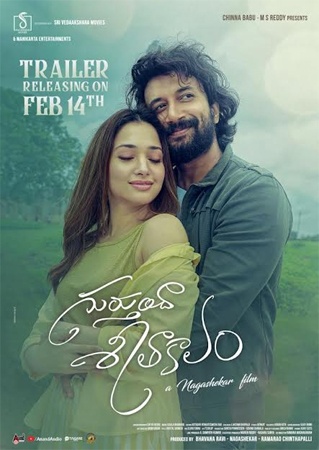 Talented actor Satya Dev and milky beauty Tamannaah Bhatia have joined hands for a romantic drama, Gurtunda Sheetakalam. To recall, this is an official Telugu remake of the Kannada hit movie, Love Mocktail.

Today, the makers have officially announced that the theatrical trailer of the movie will be out tomorrow on the occasion of Valentine’s day. But, the makers haven’t revealed any details like at which time the trailer will be released.

Megha Akash, Kavya Shetty are the other female leads in this movie which is directed by Nagashekar R. Music director, Kaala Bhairava has composed the music for this romantic drama, produced by Bhavana, Ravi Nagasekhar and Ramarao Chintapalli. The movie will be released soon in theaters.