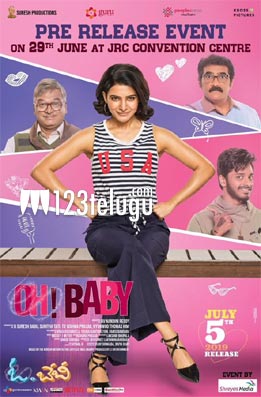 Samantha’s Oh! Baby is gearing up for release on July 5. The actress has been promoting the film aggressively. Meanwhile, the latest update is that the film’s pre-release event will be held on the 29th of this month at JRC Convention Center, Hyderabad.

Oh! Baby is an official remake of the acclaimed Korean drama Miss Granny and it also features senior actress Lakshmi and Naga Shaurya in key roles. Directed by Nandini Reddy, the film is produced by Suresh Babu.