Date locked for the launch of Krishna Vrinda Vihari’s first song
Published on Apr 7, 2022 11:11 am IST 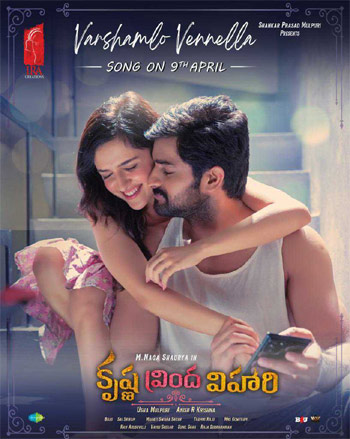 Young and promising hero Naga Shaurya will be seen next in Krishna Vrinda Vihari. Directed by Anish R Krishna, the movie has Shirley Setia as the leading lady.

As the movie is nearing the release date, the makers have decided to kickstart the promotions. As a part of that, they have announced that the first song, Varshamlo Vennella, will be released on April 9, 2022. Composed by Mahati Swara Sagar, the track is said to be a romantic song.

Radhika will be seen in an important role in the movie. Vennela Kishore, Rahul Ramakrishna, Satya, Brahmaji and others are playing key roles in this movie.

Produced on a grand scale by Ira Creation, the movie is currently in the post-production phase. The movie is scheduled to hit screens on April 22, 2022.