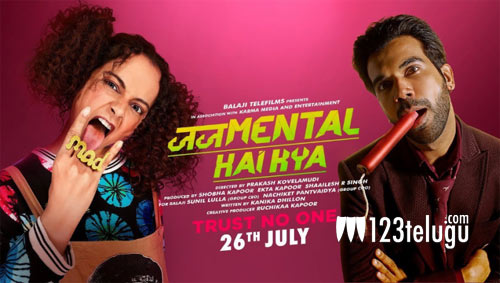 Bollywood actress Kangana Ranaut has been entangled in numerous controversies for the last few months. it looks like all these unwanted controversies are taking a toll on Kangana’s latest release, Judgementall Hai Kya. The film opened to positive reviews from critics, but the box-office collections are telling a different story.

Judgementall Hai Kya released on Friday and collected Rs 5.5 crore all-India nett. The film witnessed a decent growth on its second day and another Rs 7 crore nett was collected on Saturday, with the 2-day total nett of Rs 12.5 crore. Although there numbers are decent, the film is clearly failing to take the box-office by storm.

Judgementall Hai Kya also features Rajkummar Rao in the lead role. Tollywood director Prakash Kovelamudi has made his Bollywood debut with the movie, which is scripted by his wife Kanika Dhillon. Ekta Has produced the film.