Deva Katta’s film on CBN-YSR’s friendship and rivalry gets a striking title
Published on Aug 14, 2020 10:16 am IST 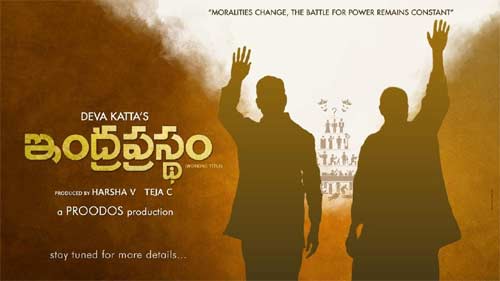 It’s well known that noted director Deva Katta recently stated that he will be helming a film on the friendship and rivalry between the two iconic Telugu chief ministers – Nara Chandrababu Naidu and YS Rajasekhara Reddy. This morning, Deva released a striking theme motion poster and the film’s working title ‘Indraprastham’.

Indraprastham will be a semi-fictional take on the political feud between once best friends turned political rivals, CBN and YSR. The film will also showcase their journey in reshaping the landscape of Andhra Pradesh politics for 30 years.

Deva Katta’s voice-over describes what the film is all about. “The purpose of any competition is to find winners. Winners run the world! When two best friends compete in such sport, the game is a lot more interesting and engaging.”

The actors who will be playing Chandrababu and Rajasekhara Reddy have not been finalized yet. Harsha V and Teja C together are jointly producing this project on Proodos Productions Banner. Suresh Bobbili has composed the music for the motion poster. The project will kick-start soon after Deva Katta’s ongoing film with Sai Dharam Tej wraps up. More details will be out at an appropriate time.