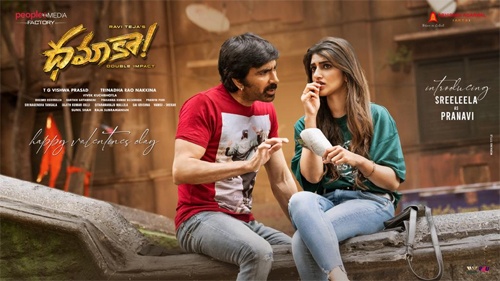 Mass Maharaja, Ravi Teja and the director, Trinadh Rao Nakkina have joined hands together for Dhamaka. Today, the makers have released a brand new poster that revealed the female lead of the movie.

It is already known that Sreeleela of Pelli SandaD fame is the heroine in this movie. On the eve of Valentine’s Day, a new poster featuring the lead pair has been released. Sreeleela’s name in this movie is Pranavi.

People’s Media Factory and Abhishek Aggarwal Arts have produced this project which has the music of Bheems Ceciroleo. The details of the rest of the cast and crew will be announced soon. To note, Dhamaka has completed its first schedule very recently.