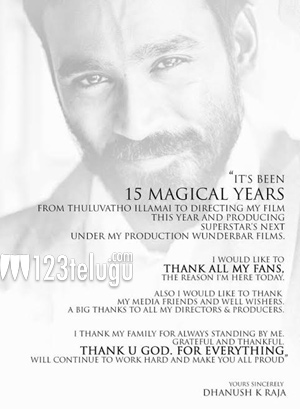 Tamil star Dhanush has completed 15 glorious years in films. The actor made his silver screen debut with the teenage romantic drama, Thulluvadho Ilamai, on May 10, 2002, when he was just an 18-year-old teenager.

Since then, there has been no looking back for the actor, who went on to act in several hit films in Kollywood and Bollywood, apart from winning the national award for Best Actor for Aadukalam. Dhanush recently made his directorial debut with Pa Paandi​, produced on his Wunderbar Films banner.

On this occasion, Dhanush thanked his fans, directors, producers and co-stars and family for being a constant support over these years.