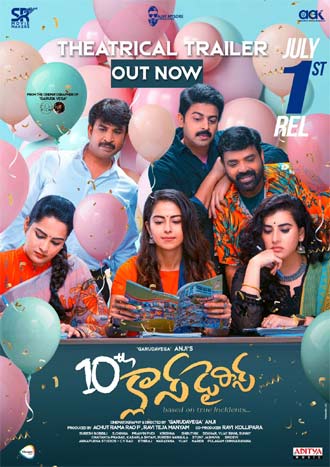 Actor Sriram, well known for Okariki Okaru and Aadavaari Matalaku Ardhaale Verule, is coming to entertain audiences with a youthful entertainer, 10th Class Diaries. Directed by ‘Garudavega’ Anji, the movie has Avika Gor as the heroine.

Star actor Dhanush has launched the theatrical trailer of the movie. The trailer looks good. Sriram plays a rich businessman who settled in foreign. He wants to meet his childhood friend Avika Gor and wants to marry her. After coming to India, he comes to that his friend is facing a serious problem. What’s that? What happened to her? How does Sriram sort it out? The answers will be known in the main movie.

Sivajiraja, Nassar, Himaja, Srinivasa Reddy, Archana, Vennela Rama Rao and others played key roles in this movie. Suresh Bobbili is the music director for this movie, produced by Achut Ramarao and Raviteja Manyam. The movie is ready for release on July 1, 2022.