Director urges YSR fans not to pressurize celebs to endorse Yatra
Published on Feb 14, 2019 3:00 am IST 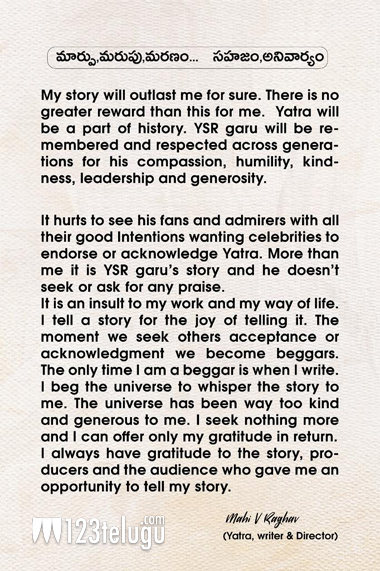 Yatra’s director Mahi V Raghav is basking in the accolades being poured in for his earnest efforts in immortalizing YSR’s historical Padayatra in the movie. Ever since Yatra’s release, many YSR fans have been tagging social media handles of several Tollywood celebs and are rebuking them for not talking about the film. Seeing this, Yatra’s director has finally made an appeal to all the ardent fans of YSR.

“It hurts to see his (YSR’s) fans with all their good intentions wanting celebrities to endorse or acknowledge Yatra. More than me, it is YSR garu’s story and he doesn’t seek or ask for any praise. It is an insult to my work and my way of life. The moment we seek others’ acceptance or acknowledgement, we become beggars. I seek nothing more and I can offer only my gratitude in return,” said Mahi.