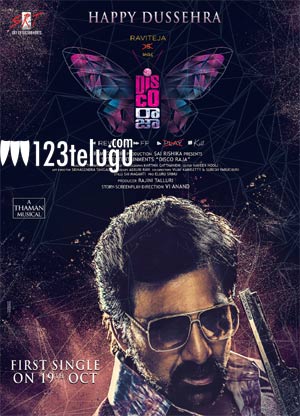 The makers of Ravi Teja’s much-awaited sci-fi action entertainer, Disco Raja, are all set to kick-start the promotional blitzkrieg. On the occasion of Vijaya Dasami, the team had announced that the film’s first single, composed by Thaman, will be released on October 19.

Disco Raja has been shot extensively in Hyderabad, Goa and New Delhi. The unit will soon be flying abroad to can a couple of songs. Ravi Teja will be seen in dual roles in the film. Also, the sci-fi backdrop is creating curiosity among fans.

Payal Rajput, Tanya Hope and Nabha Natesh are the female leads in Disco Raja. VI Anand is directing the movie and Ram Talluri is producing it. The film is scheduled to open in cinemas on December 20.