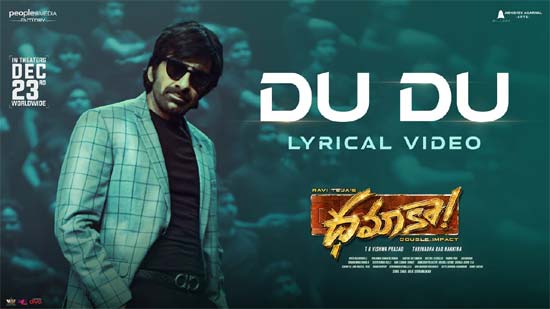 After a while, mass maharaja Ravi Teja is back to the entertainment genre with Dhamaka. This is the strong zone of the actor, and Trinadharao Nakkina is helming this action comedy entertainer. The musical promotions have also commenced way back, and the songs released so far have received a good response.

Today a new single was unveiled by the movie unit. Titled Du Du, the song describes the qualities and traits of the protagonist in a powerful manner. Bheems Ceciroleo’s tunes are reverberant to hear, and Prudhvi Chandra took the song to a higher level with his energetic rendition. Saraswathiputra Ramajogayya penned the mass lyrics.

Ravi Teja looks vibrant in the song with his ever-charming energy, which is another special element in the song. Sree Leela plays the leading lady. TG Vishwa Prasad and Vivek Kuchibhotla are producing the movie under People Media Factory & Abhishek Aggarwal Arts banners. Bheems Ceciroleo has provided soundtracks. The film releases on 23rd December.