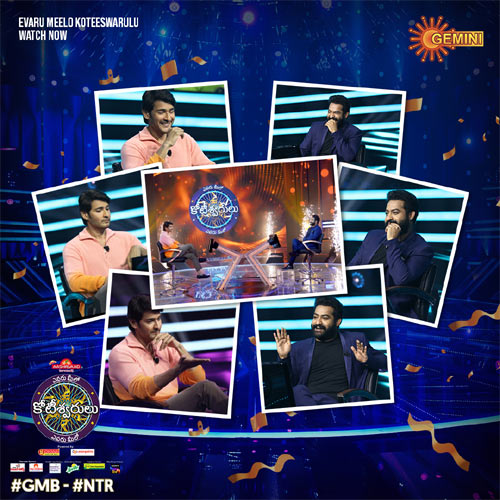 The last and final episode of Evaru Meelo Koteeswarulu is possibly the most entertaining episode of the lot. Mahesh Babu too the hot seat in the episode and his candid conversations with Jr NTR kept the viewers hooked from the start till the very end.

The best thing about this episode is that every bit of it is candid. There weren’t any formal or scripted conversations.

Mahesh Babu revealed he used to enjoy playing Veena instrument in his childhood days, but given his tight schedule now, he is unable to make time for the same.

Jr NTR asks Mahesh Babu which character in Mahabharatham excites him the most and if he could play one character from this mythological epic on screen, which would it be. Mahesh replies all the characters in Mahabharatha are important and he can’t pick one. Jr NTR then replies Mahesh would look good in Lord Krishna avatar.

Speaking about family, Mahesh says he enjoys every bit of fatherhood. Jr NTR then says he feels bad for not having a daughter as both his kids are boys. Mahesh jokingly says you(NTR) can have one if you want.

Mahesh says he really enjoys listening to the songs from ‘Okkadu’ album. Mahesh adds that he enjoys watching cricket. “I really used to play cricket a lot during my childhood. But I am unable to do so now, given the schedule.” To which, Jr NTR replied “You are working with Rajamouli soon right, he will make you play all sorts of games on sets(in a funny tone). He will not give up till he extracts the very best of us. But at the end of the day, the output he generates is worth our hard work. It is a rewarding experience working with him(Rajamouli).”

Mahesh said Jr NTR is doing an exquisite job as the host of the show. “I feel comfortable when you are around. You(Jr NTR) are the only reason why I attended this game show.”

Mahesh adds that he likes to go on at least three foreign trips with his family every year. “These trips help strengthen the bond between us and our kids.”

Jr NTR and Mahesh Babu then signed off, bringing down the curtains on Evaru Meelo Koteeswarulu season 1.