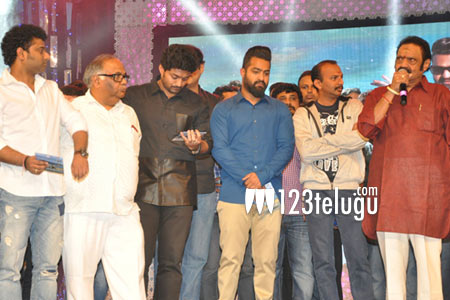 The audio launch event of Young Tiger NTR’s Nannaku Prematho was an emotional fare with the film’s team members paying tributes to their fathers and especially to the late writer Satyamurthy, father of music composer Devi Sri Prasad, who passed away recently.

Speaking on the occasion, NTR said that Nannaku Prematho is a result of the entire team members’ love for their fathers. “Memantha Nanna Pichollam andi,” said the Young Tiger as he recollected the emotional bond between the film’s team members and their fathers.

The film’s spectacular theatrical trailer was also unveiled during the audio launch to an overwhelming response from fans. Nannaku Prematho will hit the screens amid heavy expectations on January 13th.