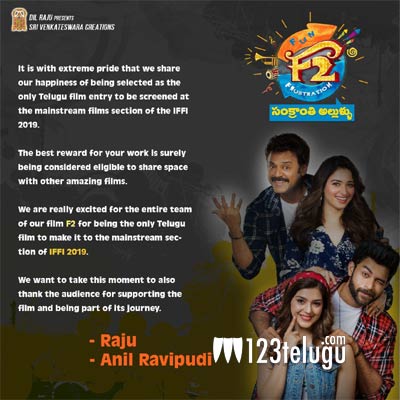 In a pleasant surprise, Fun and Frustration (F2), has been selected for the Indian Panorama section at the International Film Festival of Goa. The film will be screened at the prestigious festival which will be held between 20th to 28th November this year.

F2 had Victory Venkatesh, Varun Teh, Tamannaah and Mehreen Pirzada in lead roles. The film released for Sankranthi this year and went on to become a huge blockbuster, by collecting over Rs 80 crores share. The film was directed by Anil Ravipudi and produced by Dil Raju.