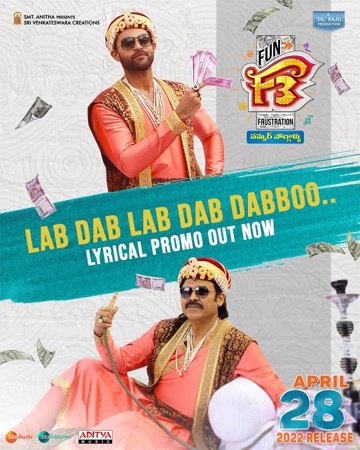 Venkatesh Daggubati and Varun Tej starrer F3 movie, which is directed by the successful director Anil Ravipudi, is all set to release in theaters on April 28, 2022. So, the makers have kick-started the promotions and as part of that, they have announced the release of the first single from the movie.

Titled Lab Dab Lab Dab Dabboo, the song’s video promo has been released today. The song, which featured Venky and Vaun, looks good and sounds crazy. The makers have announced that the full song will be out tomorrow.

Tamannaah Bhatia, Mehreen Pirzada, Rajendra Prasad, Sunil and others are playing key roles in this out and out comedy entertainer, produced by Dil Raju. Devi Sri Prasad has composed the music for this movie.