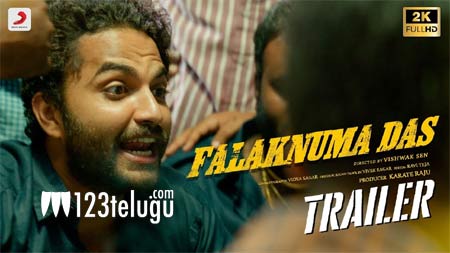 Falaknuma Das is one film which had created a good buzz with its teaser. Today, the film’s trailer was launched by Victory Venkatesh and looking at the visuals, the film gives a gritty and raw feel.

Set in the old city of Hyderabad, this film has Viswak Sen doing the lead role and even directing the film. The dialogues, taking and terrific background score hits you right away.

All the characters look closer to reality and have been set superbly in a mass backdrop. Uttej is seen in a key role in this film which is high on violence and crime.

As of now, the trailer strikes a chord and we need to see if the film impresses everyone in the theaters or not. Suresh Productions is releasing the film all over.