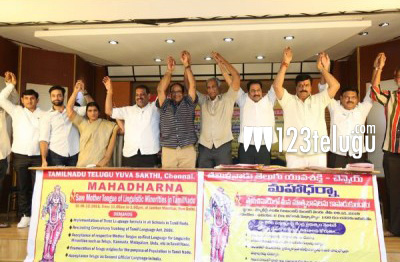 Recently, the Jayalalithaa-led Tamil Nadu government passed a G.O. which makes it mandatory for students of other native languages studying in Tamil Nadu to give their exams in Tamil. This sudden rule pushed nearly 30,000 students and their parents belonging to minority languages in a state of uncertainty.

There have been an intense outrage and a series of protests against the G.O. by Telugus in Tamil Nadu and both the Telugu states. Even the AP CM Nara Chandrababu Naidu wrote a letter to Jayalalithaa a month ago pleading her to withdraw the G.O. but in vain.

Now, a small group of Telugu film industry stars including actor Navdeep, filmmaker Thammareddy Bharadwaja, Kadmbari Kiran Kumar etc have joined the fight along with the Tamil Nadu Telugu Yuvasakthi and demanded the withdrawal of compulsory Tamil education for students of minority languages and vowed to fight for the rights of Telugu students studying in Tamil Nadu.