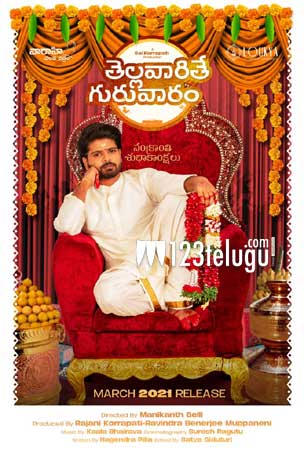 Veteran composer MM Keeravani’s younger son Sri Simha, who made an impressive debut with Mathu Vadalara a couple of years ago, is currently working on his second film. Titled Thellavarithe Guruvaram, the film’s regular shoot is underway in Hyderabad.

This afternoon, Thellavarithe Guruvaram’s makers unveiled the film’s first look poster on the occasion of Sankranthi. Sri Simha is shown in a groom’s get-up in this interesting poster. Chitra Shukla and Misha Narang are the leading ladies in this romantic comedy.

Debutant Manikanth Gelli is directing the movie, while Sai Korrapati is presenting the movie and Rajani Korrapati and Colour Photo producer Ravindra Benerjee Muppaneni are jointly bankrolling it.