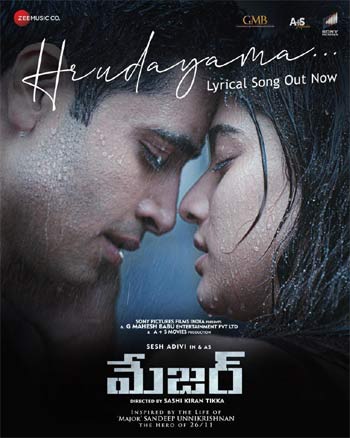 Major, starring Adivi Sesh, is one of the most-anticipated Tollywood movies in 2022. Directed by Sashi Kiran Tikka, the movie’s first song, Hrudayama, is launched by Mahesh Babu today.

Sung by the most happening singer, Sid Sriram, the melodious song is so romantic and euphonious. The lyrical video showcased the love letters and the polaroid photos of the lead pair to represent their long-distance relationship.

The song is so catchy and will get a place in many people’s romantic playlists.

Besides, the Malayalam version of the track, Pon Malare, which was released by Dulquer Salmaan is also getting a good response from musicophiles. Ayraan crooned this song.

Produced by Sony Pictures Films India in association with Mahesh Babu’s GMB Entertainment and A+S Movies, the movie will release in Telugu, Malayalam, and Hindi.