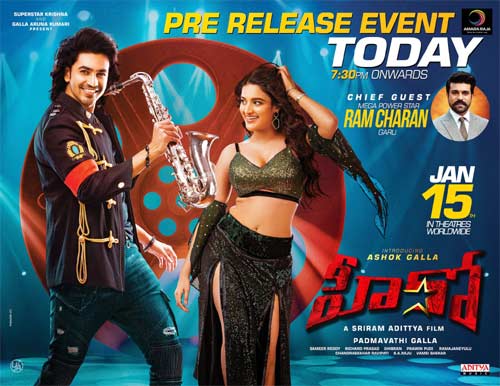 Superstar Krishna’s grandson and Mahesh Babu’s nephew, Ashok Galla is making his acting debut with Hero. Directed by Sriram Adittya, the movie is slated for a grand release on January 15, 2022.

The pre-release event of the movie is all set to happen this evening. It is already known that the Mega Power Star, Ram Charan will grace the event as the chief guest.

To make the event more special, the makers have also invited the actor Rana Daggubati to grace the event. Besides, directors Siva Koratala, Anil Ravipudi and Siva Nirvana will also grace the grand event as special guests. The star-studded event will happen at Park Hyatt in Hyderabad from 07:30 PM onwards.

Nidhhi Agerwal is playing the leading lady in the movie produced by Padmavathi Galla under Amara Raja Media & Entertainment banner.