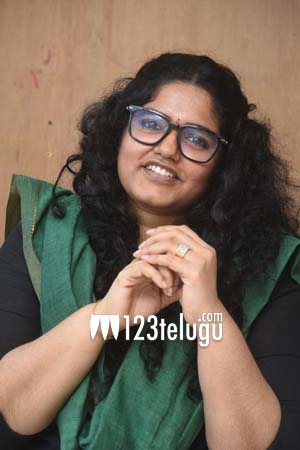 Sujana Rao, who shot many documentaries, is making her debut with the film Gamanam featuring Shriya Sharan, Charu Haasan, Siva Kandukuri, Priyanka Jawalkar and Nithya Menen in lead roles. As the movie is scheduled to release on 10 December, the director has interacted with the media and shared her experiences.

Speaking to the media, she said that Gamanam is a visual form of real-life incidents she experienced in her childhood. The director also revealed that the point of Gamanam struck her at a night. After giving it a shape, Sujana sent the draft to the producer Gnanasekhar, which he liked and agreed to bankroll the project.

She explained that even though the film is a collection of different stories, she wanted to tell audiences the journey of life from birth to death. Every character in the movie has a journey, she added.

She expressed her happiness of working with actors like Charu Haasan, Shriya Saran, and Nithya Menen. Sujana also mentioned that everyone will fall in love with the Kamala character portrayed by Shriya.

Sujuna recollected the moments when she went to narrate the story to the legend Ilaiyaraaja. Sujana says that Ilayaraja asked her to stop narrating and immediately agreed to do the music of Gamanam. He was also shocked and appreciated the camera work of Gnana Shekar, said the director. Sujuna adds that dialogue writer Sai Madhav Burra garu penned wonderful dialogues for this film.

Talking about her journey, Sujana said that she wanted to become a director in childhood when she went to movie shootings with her father. She noted that narrating a story is important whether it is a commercial or art film.

Krish Jagarlamudi gave wonderful support but was never involved in filming, said Sujana. The director, who is ready with a new script, said that she is very excited for the release of Gamanam, a heart-touching anthology.