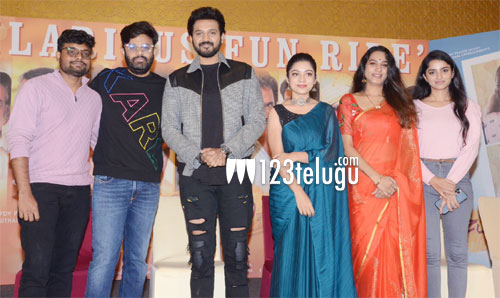 Swathimuthyam, starring debutant Ganesh released on 5th October in theatres. This family entertainer received very good reviews from critics and is doing decent business at the box office. Today a success meet was held in Hyderabad, and the film’s cast and crew attended it.

At the event, Ganesh said that he was speechless and didn’t have words to say about the Telugu audience who accepted him as an actor. He said that people viewed him as Balamurali Krishna but not as Ganesh and added that this was a sign of victory.

Ganesh credited director Lakshman for his progress as an actor and added that he would be indebted to producer Naga Vamsi who believed in the story. Swathi Muthyam stars Varsha Bollamma as the female lead.